Biotechnology is a buzzword for the nineties. In a truly literal sense, biotechnology has been around as long as conscious understanding and manipulation of the environment of living things have occurred. Domestication of animals, crop rotation and the application of a band-aid can all be considered evidence of biotechnology.

Over the years, man has discovered and invented instrumentation and techniques to study the structure and function of living things (and the cell(s) that comprise them). The biggest breakthroughs in the understanding of the similarities and differences among various forms of life were possible only when the nature of the structure of the DNA molecule was known. Since Watson and Crick published their paper on this subject in l953 scientists have been slowly prodding, probing, and manipulating DNA to discover where and how the programming material of cells works. A living thing is no better than the cells that comprise it. The cell is no better than its DNA, a compound made up of a series of paired nucleotides that programs both the cell's structures and functions.

The protocols in this module are but a few examples of how DNA can be extracted and manipulated to help gain a basic understanding of some of universal secrets of this key to life. Even though these protocols are not applicable to all students at all grade levels, both the scientists and teachers who have worked on this module feel strongly that the basis for this technology be understood. We have therefore included some analogies to put the "field of genes" in proper prospective as well as to provide further information about additional resources that are available.

This module will familiarize the student with the basic tools and concepts used by molecular biologists in their scientific work. The biological workhorse in these experiments is the plasmid, a small piece of engineered DNA which contains a genetic element (gene) that can be expressed by the bacterial host into which it is inserted. The concepts and techniques taught in this unit are: (1) inserting plasmid DNA into bacteria, (2) culturing the modified bacteria, (3) purifying plasmid DNA from bacteria, (4) analyzing plasmid DNA using restriction enzymes, and (5) amplifying a small segment of DNA using PCR. 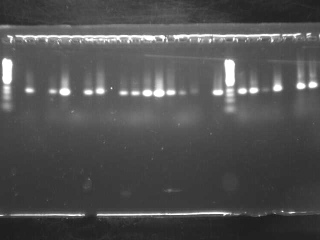 Results of the Polymerase Chain Reaction workshop held on Saturday, October 4, 1997 at CSTA in Palm Springs, CA. Participants extracted DNA from their own cheek cells and amplified regions containing the LINE-1 repetitive element. The PCR products were then separated by size and visualized using gel electrophoresis. Counting from the left, lanes 1 and 20 contain size markers, while each of the other lanes holds one participant's DNA.